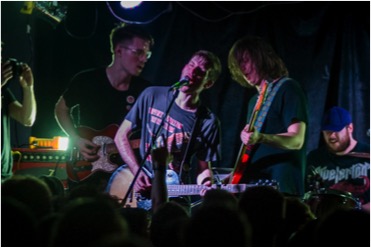 Breakout superstars ‘PUP’, made their first appearance back in 2011 featuring childhood friends Stefan Babcock, Nestor Chumak, Steve Sladkowski and Zack Mykula; under the formerly known band name ‘Topanga.’ The name of the band was greatly inspired by the famous 90’s television sitcom ‘Boy Meets World,’ however unlike the tv show the band was not well received by the public and the members decided it was best to head back to the drawing board.

Determined and despite their first failed attempt, the band reemerged back in 2014 as ‘PUP’ releasing their first self-titled album under the punk label SideOneDummy. This was later proved to be rewarding, as they are now one of the most popular and successful Toronto-based music groups, not only in the city but globally.

Although PUP is popularly recognized as a punk rock band, many fans continuously argue that   the band’s music style is rather unique, describing their music as nontraditional; their quirky sense of humour and engaging songwriting skills may have contributed to this particular style. The members, however, have stated that they are also heavily influenced by other popular bands, like Built to Spill, Weezer, The Bronx and Thrush Hermit. This ultimately allowed them to continuously top the charts in the city popularly known to produce breakout international artists from genres like Pop, Hip-Hop and R&B.

Since the debut of their first album, the band has since released multiple hit records like ‘Sleep in the Heat’ and ‘DVP’ which were featured on their second album ‘The Dream is Over’ back in 2016.

Ultimately, Hit records as the ones previously mentioned have opened multiple doors for the Toronto quartet; Despite the global recognition, it was the release of their latest album ‘Morbid Stuff’ that allowed them to make their first late night television appearance on the popular show, Late Night with Seth Meyers. The album, which is currently available on all streaming platforms is strongly focused on Babcock’s struggle with depression and was released back in April of this year. Since the release, ‘Morbid Stuff’ peaked at #106 on the Billboard Top 200, spending 1 week on the chart.

Showing no signs of slowing down, PUP has since then released dates to their highly anticipated international tour; Further ticketing and tour info can be found through the band's official website.