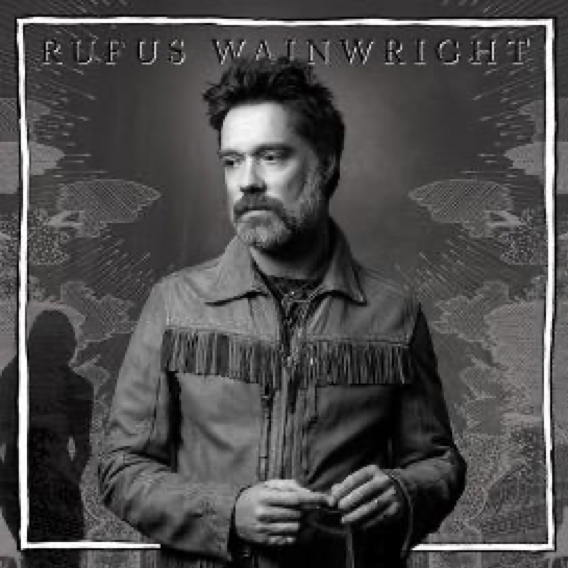 The long-awaited album from with BMG records will be out on April. 24. Pre-orders are available now.

“What I would like this album to symbolize is a coming together of all the aspects of my life which have made me a seasoned artist,” Rufus Wainwright said about his album UNFOLLOW THE RULES. “My aim is to emulate the greats of yore whose second acts produced their finest work – Leonard Cohen when he made THE FUTURE, when Sinatra became Sinatra in his 40s, when Paul Simon put out GRACELAND. Pop music isn’t always about your waistline. Many songwriters improve with age. I’m flying the flag for staying alive!”

He made a name for himself in the classical music world. His first opera, titled Prima Donna, premiered at the Manchester International Festival in July 2009 and was performed in London, New York, Paris, Buenos Aires and Hong Kong.

Wainwright’s second opera was based on the story of the Roman Emperor Hadrian and Antinous premiered in October 2018 at the Canadian Opera Company in Toronto. This got him a Dora Award for Outstanding New Opera.

Wainwright has written songs and recorded them for a wide variety of movies and TV shows including Brokeback Mountain, Shrek, Judy, Meet the Robinsons, The Aviator, Moulin Rouge, and Boardwalk Empire.

Along with his sister Martha Wainwright, he continues the legacy of their mother, Canadian folk icon Kate McGarrigle, and raise funds for the Kate McGarrigle Fund funding sarcoma research and a music therapy program.

He is currently working on a number of films, podcasts and musical projects and lives in Los Angeles with husband Jörn Weisbrodt and shares custody for his daughter Viva with her mother Lorca Cohen.

Wainwright has tour dates from April to November. As of this writing, there are no plans to either cancel or postpone the tour if the COVID-19 crisis continues.

Here are the dates for tour if goes to the original schedule: April 19 in North Charleston, SC at the High Water Festival, April 24 in Bremen, Germany at the Jazzahead Festival, April 25 in Bourges, France at the Festival de Printemps de Bourges, April 27 in London, United Kingdom at the Islington Assembly Hall, May 1 in New York, NY at the City Winery, May 2 in Huntington, NY at the Paramount Theatre, May 3 in New York, NY at the City Winery, May 8 in San Francisco, CA at the Fillmore, May 9 in Los Angeles, CA at the Troubadour, May 11 in Solana Beach, CA at the Belly Up, May 17 in Guadalajara, Mexico at the Corona Capital, May 30 in Kværndrup, Denmark at the Heartland Festival, June 2 in Istanbul, Turkey at the Zorlu PAC Jazz Festival, July 4 in Caldas De Reis, Spain at the PortAmérica, July 5 in Madrid, Spain at the Noches del Botanico, July 7 in Oeiras Valley, Portugal at the Festival Jardins do Marques, July 14 in La Rochelle, France at the Francofolies Festival, July 18 in Echternach, Luxembourg  at the Echterlive. August 1 in Glasgow, UK at the Kelvingrove Park, August 2 in Co Waterford, Ireland at the All Together Now and on November 6 in Paris, France at the Grand Rex.

Tickets for his tour are available right now. To listen to his music, go to Spotify.