Picking up the craft

Being stuck in quarantine puts a damper on the adventures that lie right outside your front door. But what if I told you that adventure is just as easy as picking up your phone laptop PlayStation or Xbox controller. And indulging in some nostalgia. That’s right! During the quarantine, I decided to download Minecraft.

Minecraft is a series that had its start in 2009, as a simple sandbox pc game about survival and placing blocks, nowadays it is grown so much with three other versions under its build including an educational variant and a fan-made choose your adventure version for mobile. With over 112 million players as of 2019, I am not surprised the game has lasted this long.

Now you’re probably wondering, why you are playing glorified E-Lego when you could be playing actual adventure games...well, the reason I’m playing Minecraft is that it’s relaxing, and I can burn down and pillage random villages, all the while playing in a peaceful comfy environment.

For the purposes of this review, I will be focusing on the mobile version of Minecraft. Because that’s the version I have...get over it.

I will be critiquing the game on its: playability, user interface, and world design.

So as players should know there are a plethora of different game modes from creative all the way to education.

On top of that, you can even choose the Seed you want to play on... before this review I have been playing on the abandoned village seed, and have been turning the village into a work camp for my own adventuring purposes.

The user interface is easy to use but very convoluted. I like the different modes and seed selection, but I would rather have it be in pages rather than in a scroll format. As for when the game actually starts. The controls are decent but instead of a D-pad I would have rathered gesture controls for each side of the screen. In the case of block selection, I do like how everything has its own tab and location. But I can’t help but feel that the inventory should be the first tab, not the very last taOverall

The user interface is nice and I would be nitpicking if I docked points for certain small details. (It’s a mobile port for crying out loud).

I give the UI three Minecraft blocks out of 5.

For the review, I’ve created a world for each game mode.

So creative mode is fun if you want to just walk around and build stuff without needing to interact with any of the mobs, it plays well but as someone who likes to interact with things and sort of “play” a game rather than play in the sandbox it gets really boring after a while...especially if the blocks don’t place half the time.

Creative mode gets a 1 block out of 5 in playability.

Survival is my favourite mode to play on because it turns Minecraft into a game. Rather than a sandbox. I played on the haunted mansion seed and it was really fun actually I wouldn’t recommend survival if you play on the mushroom island seed but hey survival mode stands the test of time. (i often find myself zoning out when I play)

Five blocks out of five

I realized that education mode wasn’t actually a mode but a cheat setting,

And education mode doesn’t do anything, tho I am curious about the actual version of Minecraft that is educational.

Anyways education mode gets zero blocks out of five.

So adventure mode is complete garbage. You can punch mobs and animals. But you can’t really interact with any of the blocks to create things you’ll need to survive.

0 out of five blocks.

In overall playability, I give the game a 2.5 out of 5 blocks

Survival and creative work but the other modes don’t. But at least you have barebones Minecraft still. 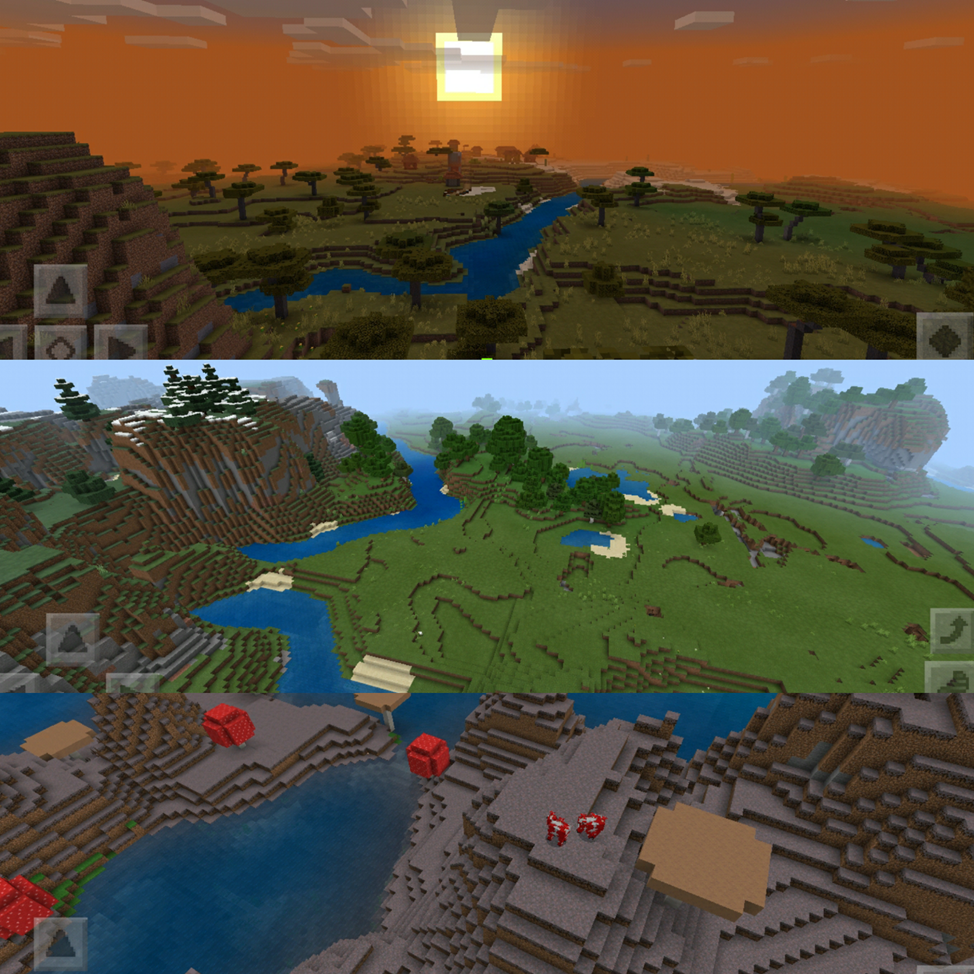 When it comes to Minecraft the graphics are simple but it gives off a really cosy vibe even at might. Each seed is lovingly put together. And when set on infinite you get these sprawling landscapes.

Not to mention the sound design is really good...however, the peaceful music from the original game is missing in the mobile port. But each texture has its own unique sound like wood making a clomping sound. Grass having...well… a grassy sound I guess I don’t know how to describe it.

Did I mention the haunted mansion yet? Because that mansion is probably the spookiest thing in Minecraft yet.

The design gets 5 blocks out of five.

The game is the perfect form of escapism we need during this quarantine, its warm enough to give off a cosy welcoming vibe. But exciting enough to give you a sense of adventure. Also, did I mention the sprawling landscapes? It’s like hiking up the escarpment but not really because you’re at home.

But you’d have to see it to believe it.

And for those who have played Minecraft before. Maybe it’s time to take that shot of nostalgia and pick up the game.