FIFA 20: What I Learnt About My Favourite Game

Being stuck at home during COVID-19 isn’t something anyone ever predicted or know will happen. But it’s happening and we’ve all found some ways to cope with being sat at home all day, every week for the past two months or thereabout. Coping mechanisms is therefore necessary during this trying period and one of mine is playing FIFA 20. You’ll notice how I didn’t say I play video games or any other type right? That’s because I am not really a “gamer” but because I enjoy soccer a lot and I’m a huge follower, I am inclined to play a game that portrays the essence of the beautiful sport that I love so much.

I am naturally inclined to watch matches every week from various MLS leagues and football, as they call it in Europe. I sort of always have a club that I am inclined towards, in every country’s league game I watch. So in the MLS, I support Montreal FC, in Germany, I love Borussia Dortmund even though Canadian soccer player and rising star, Alphonso Davies play for Bayern Munich in the same league. But I am particularly a fan of Arsenal football Club in England. This experience has made me aware of situations around all of these clubs – even the ones I don’t particularly look out for, or support.

This makes me aware of the design and structure of the FIFA game generally, and of course, FIFA 20. In actual fact, I have been playing the game for five years consecutively now. I also like the multidimensional nature of the game where you can play a career as a coach, or for an individual you’re trying to build their profession. You can also play online with your friends and gave bragging rights over. That’s one of the most intriguing parts for me. You can also use international teams such as Canada, and any other ones you feel like. The variations of clubs you can pick is in abundance. From teams in the MLS to other leagues, your options are unlimited. You can also play the career mode, by being charge of not only the team but other structures like players’ contract, signing new players and selling old ones, setting up the team play style and even hiring other assistant scouts and managers. 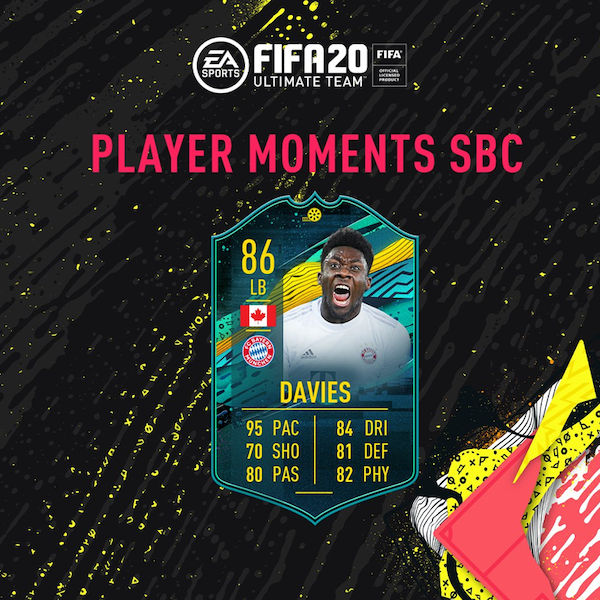 Inasmuch as its really fun playing the FIFA game and FIFA 20 in this case during this COVID-19 period, I have come to learn a number of things as well. And some of them are quite frustrating, while I enjoy other factors. First off, Alphonso Davies is such a huge player even on FIFA. Managing a team like Arsenal on the career mode for me means I needed to buy new players. My first thought was to but Davies and it paid off. His speed alone is very dependable. He is rated 77 but has the potential to rise to 88 overall, which is really high for players on FIFA. I am really enjoying using him as my preferred left back (LB).

I was also given the task of managing a national side during my career mode game and while at it, I realised players don’t celebrate together on international teams. You see, on the club career mode when a player scores a goal, his teammates rush to celebrate with whoever it is that got the goal. There are also several celebrations that makes the game seem very realistic. This is however not the case for international games. The player who scores celebrates alone while other players walk away like nothing happened. I find this really weird.

Among difficult things to do in the game include scoring headers and marking opposing teams. The last FIFA game which was ‘19 made these things peculiarly easy to achieve. But in FIFA 20, I’ve been close to dropping the gamepad out of frustration of not being able to mark, especially if you’re playing the Legendary level to the game. At other times, I’ve been forced to lower the difficulty level to as much as professional. And the difficulty level are as follows:

So, I’m sure you can understand my frustration. The game play unlike previous years isn’t very fluid. But you have to make do with what you have right? At least, COVID-19 isn’t letting you have much of a choice. Maybe it’s time I try my hands-on other games. I’ll look out for Call Of Duty and tell you what I think.