Sadly, not every encounter with the opposite sex makes us want to drive them all night.

Boy Problems hit the airwaves in the spring of 2016 – and while critics applaud it for its more than catchy tune and its upbeat pop sound, what cannot be denied is the faux-feminism found within its lyrics:

“Listen, just leave or stay – but I’m done listening to it”.

This is apparently what the persona’s ‘best friend’ said to her when Carly would not stop ranting about an errant boyfriend – and while it would seem to be a wake-up call to stop being a ‘sissy’, it is actually a sign that the listener is somewhat of a fair-weather friend.

According to Diane Dreher, PhD of Psychology Today, research says that people who talk about their problems with trusted friends actually experience not only a ‘reduction’ in ‘stress’ and ‘physical pain’, but also a ‘strengthening’ of their immune systems.

She says that keeping feelings bottled up inside exacerbates our feelings of inherent distress and reduces our productivity rate due to this lack of ‘centeredness’ and ‘peace’.

Even if Clair Borg, a psychotherapist, says that exercising too much empathy can adversely impact a person’s own mental health, there is no sign to point that this was the case in the song.

To elucidate, the Call Me Maybe crooner belts out the following line as a response to her friend’s complaints:

“Yeah, I know what it looks like from the outside”.

It actually sounds like the audience has little empathy for the persona, given how she makes Carly feel like the former is more on the outside as opposed to the in -- as a valued member of the singer’s inner circle.

The importance of relationships

A business coach by the name of Andrew Senduk wrote a 2018 article on the importance of cultivating an inner circle – and in the process, quoted a Harvard study which concluded that ‘relationships are the only things that matter in life’.

Senduk expounds by saying that a person can have a dream job and heaps of material possessions; but without meaningful interpersonal connections, he is bound to be ‘unhappy’.

So it is only reasonable for the main character in Boy Problems to be upset over a romantic tie with a significant other – while also highlighting the happiness that an empathetic friend can offer.

Furthermore, Mayo Clinic listed down the top causes of suicide -- and it unfortunately included the following suppositions: that victims felt “trapped” or “hopeless about a situation”, or that they had been “severely anxious or agitated” about an issue or other prior to ending their lives.

But what was infinitely more significant about these findings were the risk factors associated with these triggers – the existence of a “hostile environment”, a feeling of being “socially isolated”, and most damning of all, an experience of a “loss” (such as in the case of either a death or a break-up).

We believe the friend should not have attempted to support the persona by preventing her from talking about her boy on the fear of being unfairly labelled for it.

Doing so does not solve the problem at its root -- it just teaches Carly to avoid it by encouraging a culture of shame.

In fact, this rhetoric is an undeniably ubiquitous form of emotional abuse that typically ignites suicidal thoughts.

The aforementioned ‘hostile environment’ actually points to a lack of social and personal acceptance of one’s own predicament.

The American Psychiatric Association stated that a person is victim to public stigma when there is a ‘negative or a discriminatory attitude’ towards him because of a condition or other.

This so-called negativity can take the form of ultimatums – such as was the case in the song:

“What’s worse? Losin’ a lover or losin’ your best friend?”

These were the words Carly sang to justify her seemingly ‘personal’ decision to stop fussing over her boy problems.

But personal decisions are not really voluntary if some form of vitiation of her free will exists, am I right?

She was threatened into making this decision.

As a result, not only was her growth stunted because she did not immerse herself in the lessons contained within this heartache, she also condoned the behavior of a friend who condemned her for having emotions that were anything but happy.

If that was the case, I would rather lose my ‘best friend’. Thank you very much. 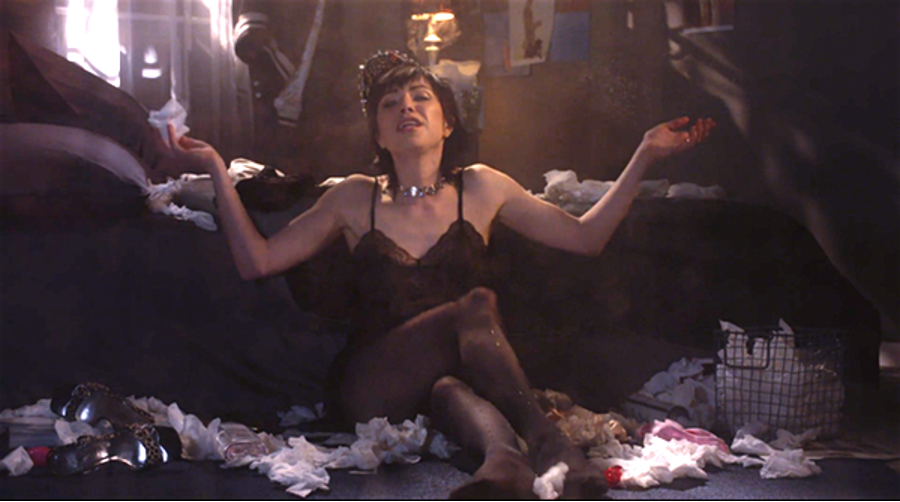 [It is okay if you made it rain today, Carly. Photo credit: towleroad.com]