In many ways, it’s a miracle that any music was recorded live in studios this year at all. Many musicians were forced to switch to remote collaboration, and to be fair, many thrived on it and created some incredible projects. But for genres like jazz, it’s essential for the artists to be able to hear and respond and interact with each other in the moment, which creates a real challenge when musicians are made to stay distant in studios and rehearse almost entirely in isolation. In the case of Halifax drummer Morgan Zwicker, his quartet only played together 3 times total before the recording session for his debut jazz album, Phase Shift, and it’s a testament to the skill of these four musicians that the record sounds so remarkably well-realized. Phase Shift is full of virtuosic performances and creative arrangements and is a stunning first outing for the group. 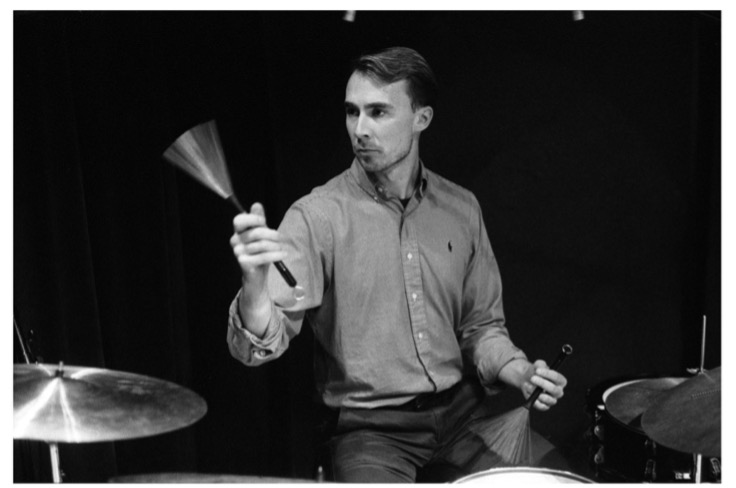 Zwicker is a formidable player and bandleader behind the kit – his dynamic mastery, impeccable time, and rhythmic audacity provide a fluid but supportive foundation for bassist (and co-arranger for some tunes) John Janigan-Mills, guitarist Geordie Haley, and woodwind player Nicola Miller. Some standout solos include Zwicker’s dynamically charged vamp on “Caffeine” and Janigan-Mills’ gorgeous and melodic turn on “Oxytocin”. All the solos on the album closer, bluesy fusion jam “(un)Happily Ever After”, are also phenomenal. However, in spite of the power of these performances, the compositions on the album may be the biggest selling point of the project.

First things first, it’s worth mentioning that Zwicker studied neuroscience at McGill before switching to a career in music. The influence of this background is pretty clear in song titles named after mood-controlling hormones (like the gentle “Oxytocin” and the uneasy “Cortisol”), and even more so in the structure of the compositions themselves. It feels like each piece is trying to inspire a specific range of emotions and using any means necessary to do so - Zwicker certainly isn’t leaning on conventional jazz theory here. His writing is full of non-linear harmonies and unexpected rhythmic textures – check out the pregnant pauses in the melody of “Oxytocin”, the telepathic time-signature bending of “Adrenaline”, or the maniacally off-kilter backbeat that comes in during the final minute of “Disorientation”. Although you might never see any of these left turns coming, as soon as you hear them they immediately feel essential to the purpose of the song. The end result is that while the compositions are wonderfully unpredictable, they never feel random. This is the sound of someone who knows the rules well enough to know when to throw them out the window.

Phase Shift isn’t always trying to evoke something positive from the listener, and that’s kind of the point. This is a record about contrast, change, fluidity, motion – really, about the complexity of the human spirit. Several of the songs have multiple disparate sections, and even within those sections there are often multiple elements juxtaposed against each other. A great demonstration of this is “Late Nights, Early Mornings”, which balances a gentle, unhurried saxophone melody on top of a frenetic, rattling double-time groove before eventually breaking into an angular, effects-laden guitar solo. These wildly different elements all work together to create an intricate blend of emotions that immediately resonates with anyone who has slept 3 hours a night for a week (or longer).

2 Photo by Konstant Studio via morganzwicker.com

Which brings us right back to the amazing fact that Zwicker and his band barely had the chance to rehearse together before recording this album. It’s worth considering that this unfamiliarity with each other’s playing may have led to more moments of genuine surprise and on-the-spot thinking in the session – it could be that some of the greatness of this album might not be present in spite of the challenges of the past year, but because of them.

Check out the band playing “Cortisol” below: