Have you binge-watched a show or a movie recently and maybe thought to yourself, “Hey, that looks familiar!” Chances are, you’ve seen it before in other movies or shows. Or, if you’re a Toronto local, you’ve most likely seen it in person!

Toronto’s nickname is Hollywood North – and for good reason. Many American productions come here to shoot because the costs of shooting in Canada are a lot lower than in the U.S. In most movies shot in Toronto, the city fills in for some other (usually American) location. You might not know, but there are at least a few hundred productions that have come to Toronto to film over the years – even as far back as 1974 with Black Christmas, which shot at the University of Toronto.

Here’s a look into some of the popular filming locations in the city of Toronto and what movies or shows have been filmed there.

If you’re caught up on Amazon Prime’s The Boys, you’ll know that the Vought Headquarters is actually Roy Thomson Hall. Located at the corner of King and Simcoe Streets, it has been seen in other shows and films like The Expanse, Total Recall and X-Men. 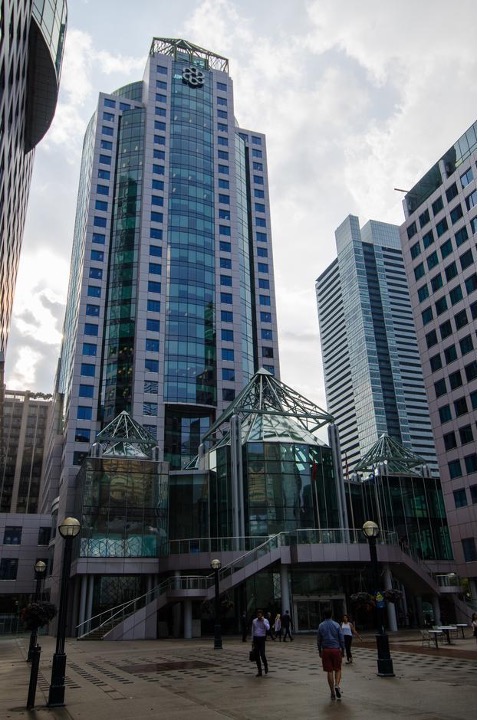 Across from Roy Thomson Hall is another popular filming location, Metro Hall. Its main entrance is located at 55 John Street and its incredible pyramid-shape looking architecture has been seen in many productions. It was used as the United Nations Headquarters in the Christian apocalypse series Left Behind, starring Kirk Cameron, and has been seen in many other Canadian-American productions like Flashpoint, Warehouse 13 and X-Men. If any production has shot either at Metro Hall or Roy Thomson Hall, it’s likely you’ll see one or the other in the background.

In Saw: The Final Chapter, the opening scene takes place in David Pecaut Square, which is right out front of the building. Check it out below – spoilers follow, of course. 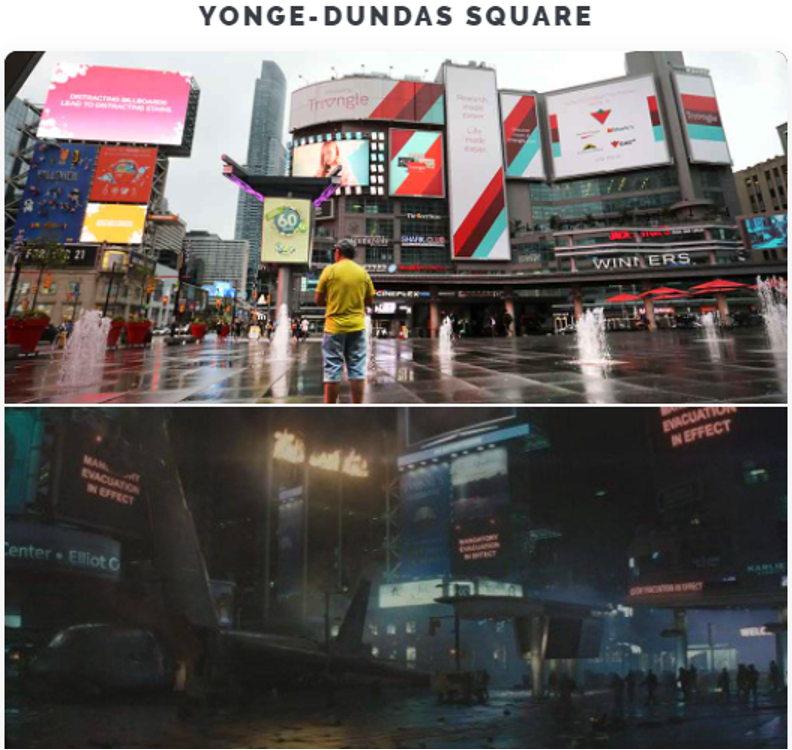 Yonge-Dundas Square is what I like to call Toronto’s Time Square. All the bright, flashing digital displays make it the perfect spot for either a hero vs. villain battle or a casual stroll at night. The location was used in Suicide Squad when the squad walks past a downed airplane after landing in the city and during a car chase featuring the Batmobile, in Flashpoint, and in Kick-Ass. 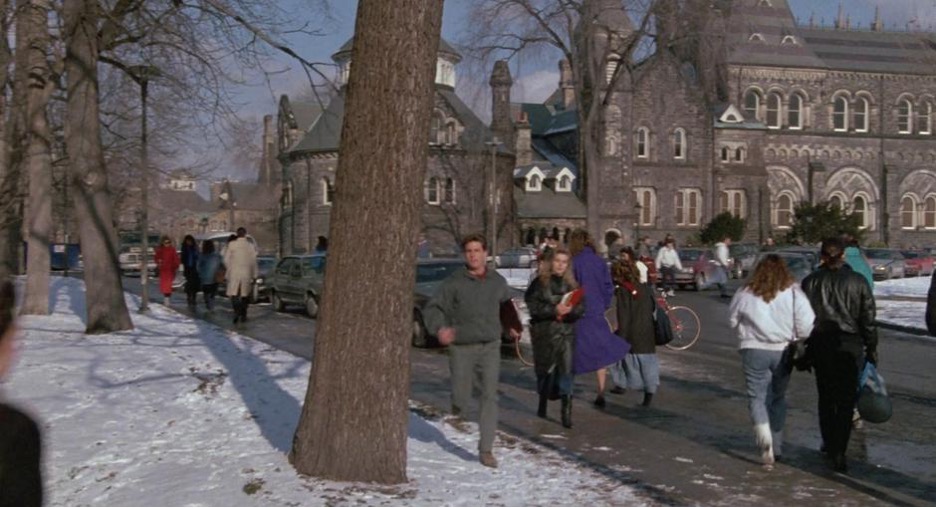 The University of Toronto is a popular choice for filming, especially when it comes to needing a historic location or just an educational experience. Locations used have been across their entire campus networks across the city – it’s a big university! Either way, it’s been featured in many productions over the years such as Orphan Black, Hannibal, Enemy, starring Jake Gyllenhaal, Resident Evil, Good Will Hunting, The Incredible Hulk, Rookie Blue, the list goes on…

An interior shot of the restaurant in The Boondock Saints (1999). © Franchine Pictures

This historical eatery spot on Dundas Street West beside Ossington Avenue was seen in The Shape of Water, Nikita, Cocktail starring Tom Cruise, The Boondock Saints, and even Hairspray! I guess our celebrities need a cup of coffee every now and then too. 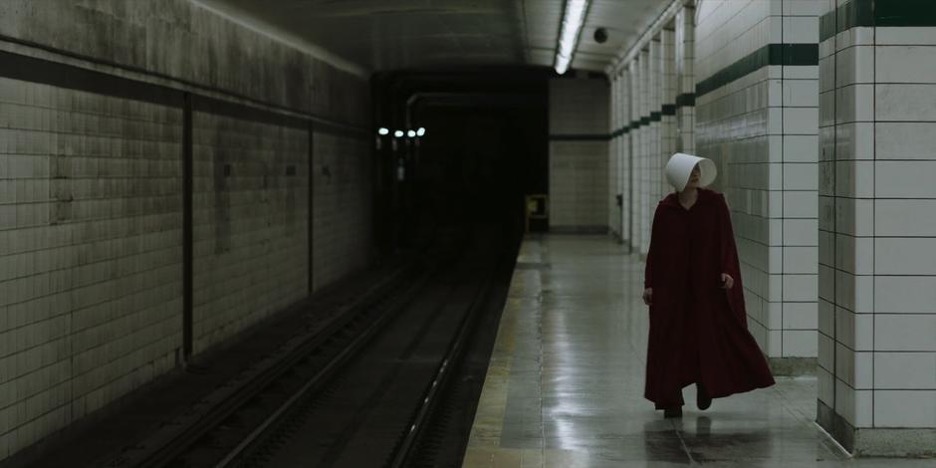 Under Bay Station is ANOTHER subway station, Lower Bay Station. It was originally as used as an interline between Line 2 and the Yonge-University Line, allowing trains to move between them. It was only used for 6 months before the TTC realized it was too confusing for passengers, so it was closed off. So, we have an empty subway station that stands in for any generic subway platform. Many productions have used this pretty cool spot, including The Handmaid’s Tale, The Boys, Shazam!, Suicide Squad, Repo Man, Total Recall, Resident Evil, among many others.

One of the top tourist attractions in the city, Casa Loma has housed many film productions over the years. One of the more well-known productions is X-Men where it stands in as Xavier’s School. Other productions that have used Casa Loma include The Vow (Gwen’s wedding reception), Hannibal, Scott Pilgrim Vs. The World, Titans, Chicago, and Billy Madison. 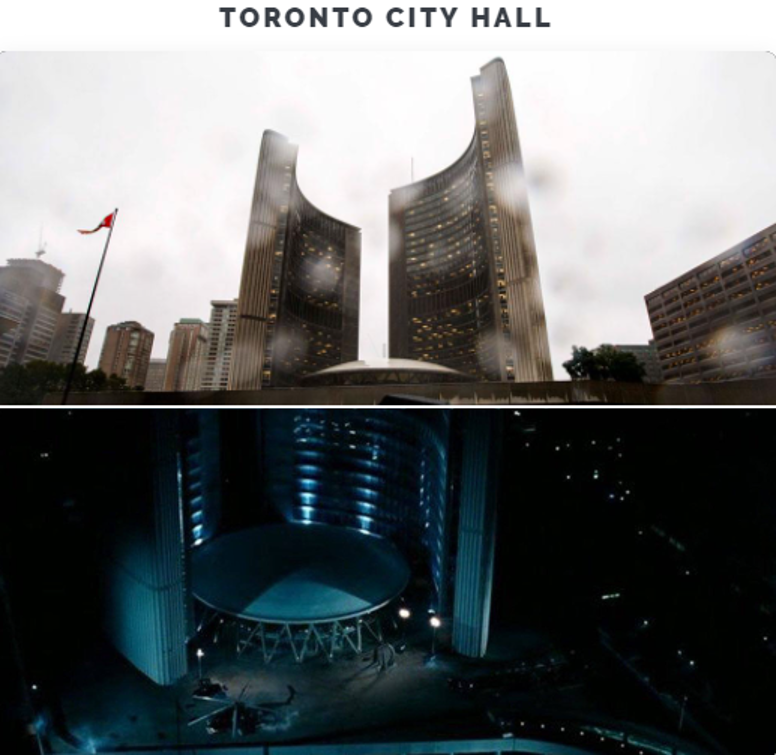 Nathan Phillips Square – or simply, Toronto City Hall. Located on Queen Street West steps away from the Eaton Centre, it has been used for one of the many intro shots in Flashpoint. It’s also been featured in Room, The Vow, The Handmaid’s Tale, The Expanse, and the Resident Evil franchise. 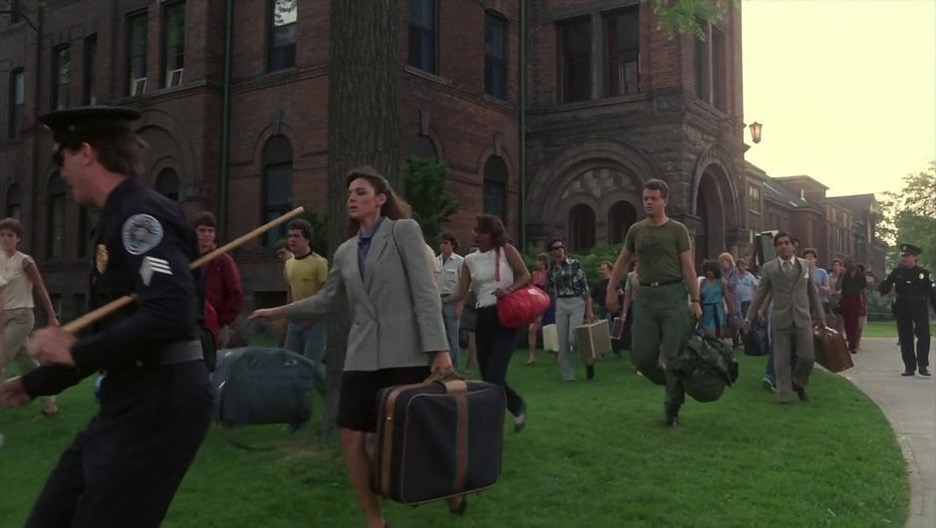 An exterior shot of the G building at Humber Lakeshore in Police Academy (1984). ©The Ladd Company

Did you know our south campus has been used in various film and TV productions? Before it became Humber, it was the Lakeshore Psychiatric Hospital. Underneath the campus is the infamous tunnels that were used to transport patients and supplies. More recently, it housed Killer Croc in Suicide Squad. The campus was also used as the police academy in the Police Academy films as well as in Urban Legend with Jared Leto and more recently in The Handmaid’s Tale and the Netflix series Locke and Key.

Other popular places for filming include the Elgin & Winter Garden Theatre and the Fairmont Royal York!

Know any other popular places in Toronto used for filming? Let me know!