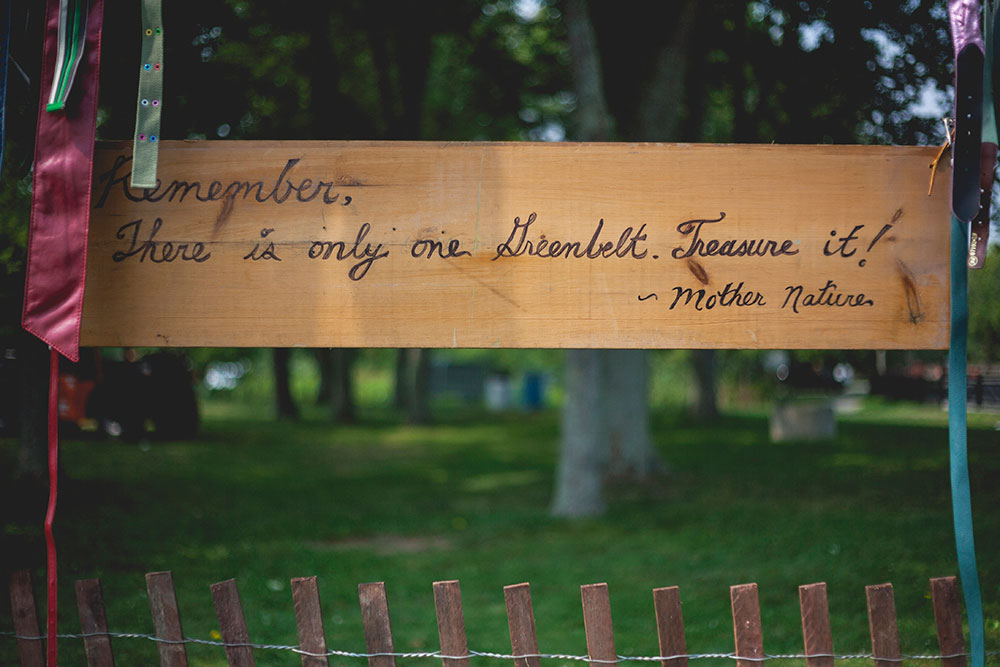 Christie Lake Conservation Area is the perfect setting for the Greenbelt Harvest Picnic. With tall trees, an open grass field, and even a beach on site, there couldn't be a more beautiful area to hold a celebration of everything local. Local food, music, clothing, and everything else under the sun drew in a respectable crowd this year, lining the outside of the concert grounds in a circle of vendor tents that seemed never ending. While the venue slowly filled with people, the stage was set for the first musical act of the day, The Dinner Belles. After a quick thank you to the key sponsors and a briefing on all of the picnic activities available to try, the self-proclaimed “House Band” (being the only band scheduled for two sets) started the eleven straight hours of music planned for the day. They immediately set an upbeat mood, bringing the picnic to life with their down-home country and folk sound. Country with not too much twang and a little more rock'n'roll in it. Terra Lightfoot played three sets, two as a part of The Dinner Belles, one on each stage, and then a set of her own up on the main stage. Being one of the best female vocalists out there right now, she got people up and dancing during her solo set with her Canadian folk rock. Midway through she lost a guitar strap, reminiscent of  Eric Clapton in The Last Waltz but she quickly recovered and was right back into the song with some help from the crowd. 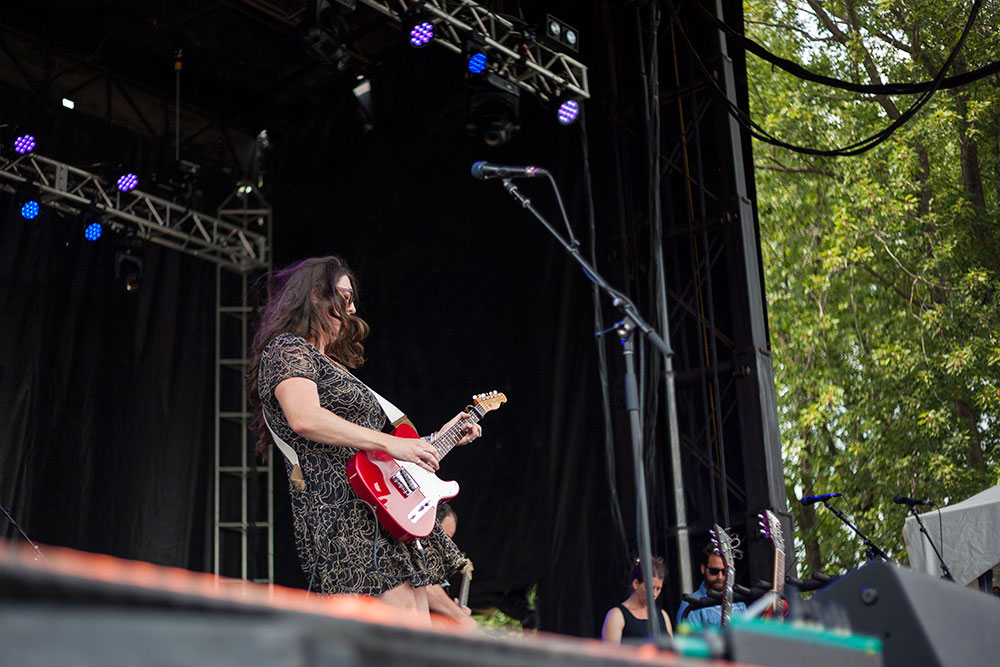 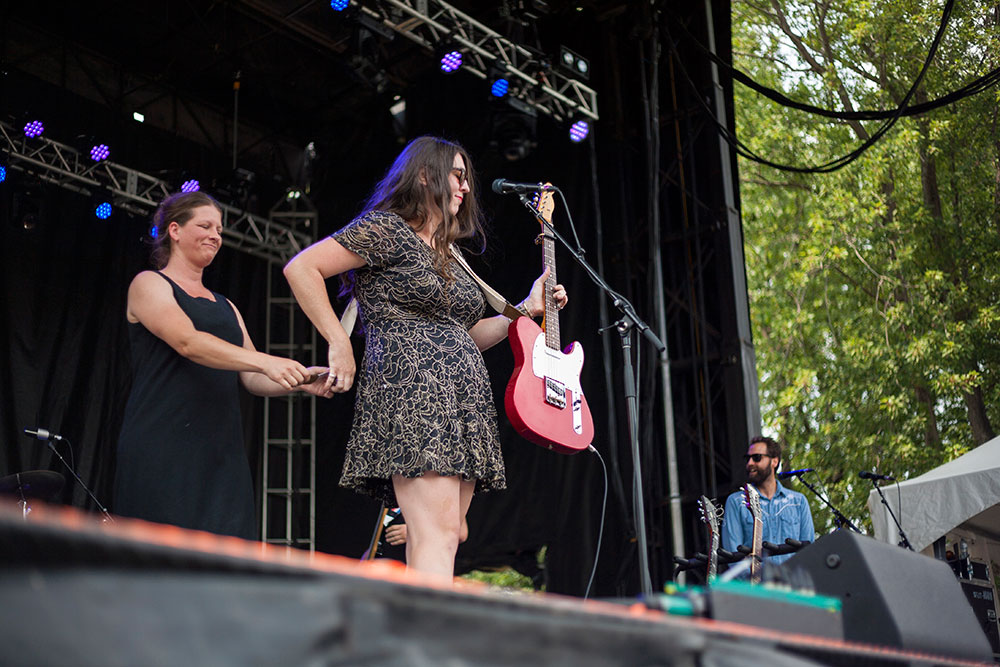 The Front of the House stage was about fifty yards in front of the main stage for flawless transitions between bands with no wait times which means no stoppage in the music. Matthew de Zoete continued the feel-good picnic vibes while the main stage prepared for Martha Wainwright. When she took to the stage she started her set with a new song. She admitted she hadn't released an album in a while, being preoccupied raising children. While sometimes you have to guess at what a song is written about, Martha loved to tell the story behind almost every song, each with a strong message and powerful connection to her life as a musician and family life. She formed a bond with the audience by opening up and talking to them as friends and family rather than typical fans, although shouting some lyrics like “You mother****ing ********” may have been a little above the heads of the younger children in attendance. 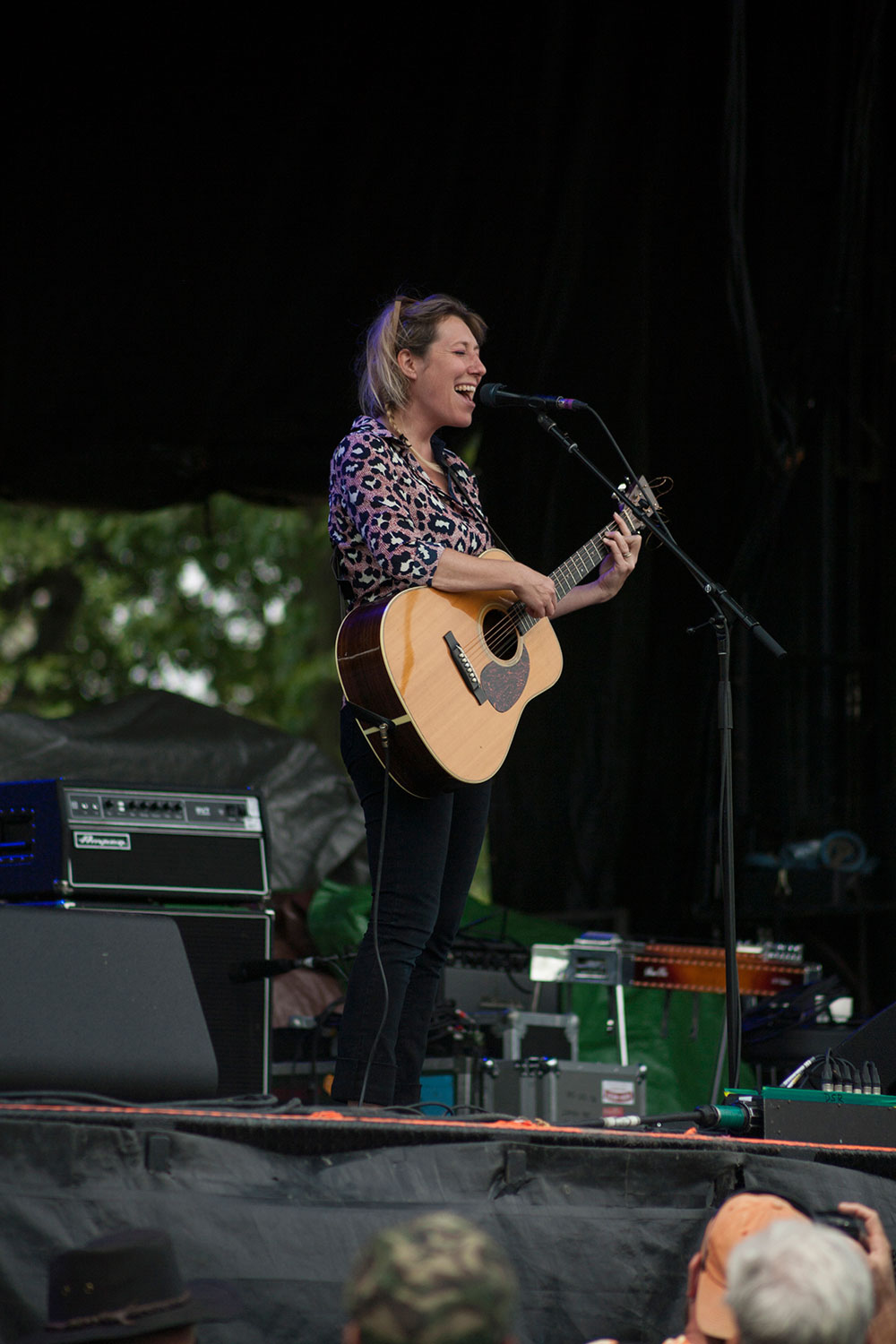 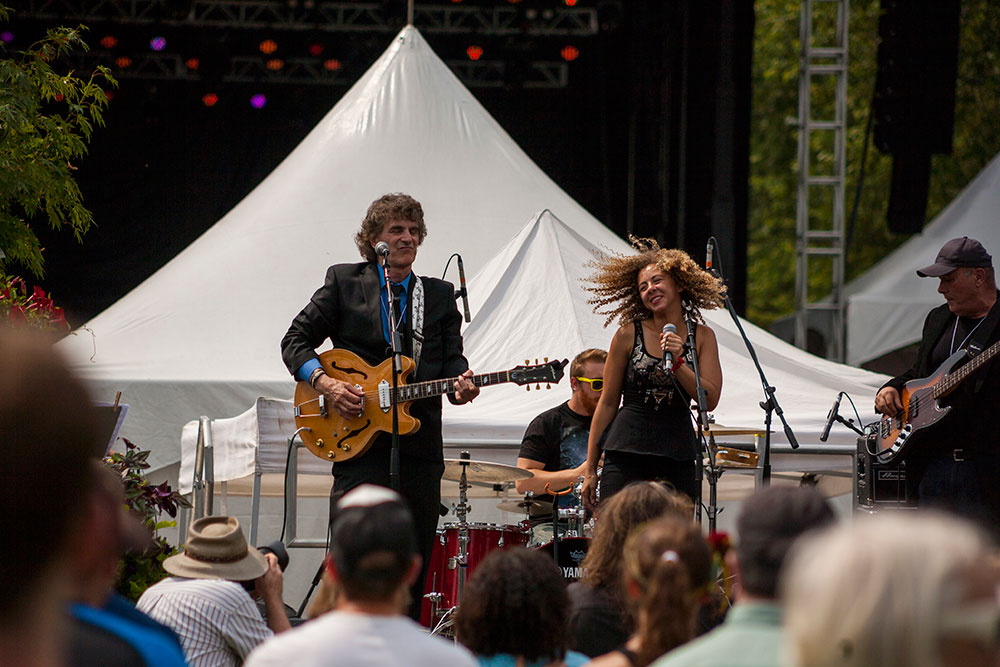 The schedule was packed with great artists like Hailee Rose who brought a big rush of energy to the Front of the House, singing with her heart and soul and a huge smile the entire time. A lot of fun to watch and you can't help but smile when you look at her on stage. Lee Harvey Osmond, described as “that large, melodic growling man” on the main stage rocked an incredible old school acid folk set. Tom Wilson postponed his appearance at the Country Music Hall of Fame in Nashville Tennessee to be at the picnic. He ended his performance with “Peace on Earth, everybody!” A message found throughout the Harvest Picnic. 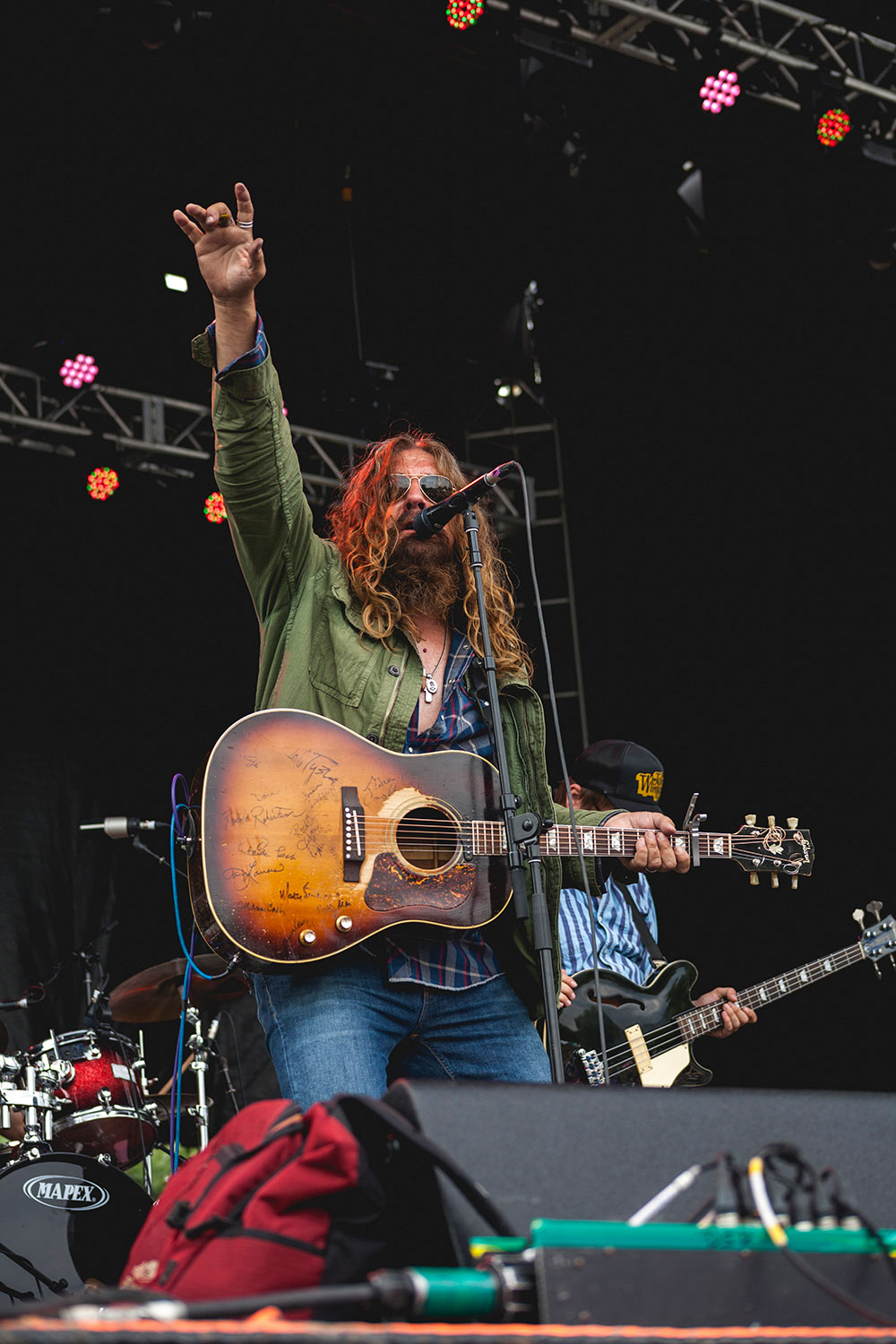 The line up was a 10/10 featuring Laura Cole, a five time Hamilton Music Award winner, Kathleen Edwards who sang so well it sounded just like a studio album, and Missy Bauman contributing to the incredible amount of stunning female vocalists, showcasing the young local talent in with the seasoned veterans. When Basia Bulat's turn came around she put a stamp on her performance, which absolutely blew me away. Her style unmistakable, and her music, sweet, soft, and melodic, bringing guitars, a harpsichord, and french horn. When the harpsichord hit the stage, she may have been too excited to play it because the patch chord got ripped out and quickly she had to try to plug it back in while still singing. She kept the vocals going but opted to use the second mic to try to get some volume to come out of the speakers after fiddling with the loose patch chord. It ended up being a nice impromptu acoustic break while the crowd clapped along to help her keep the beat. The women definitely stole the show and the crowd knew it. As the day went on it felt more and more like a gathering of family and friends than a concert. 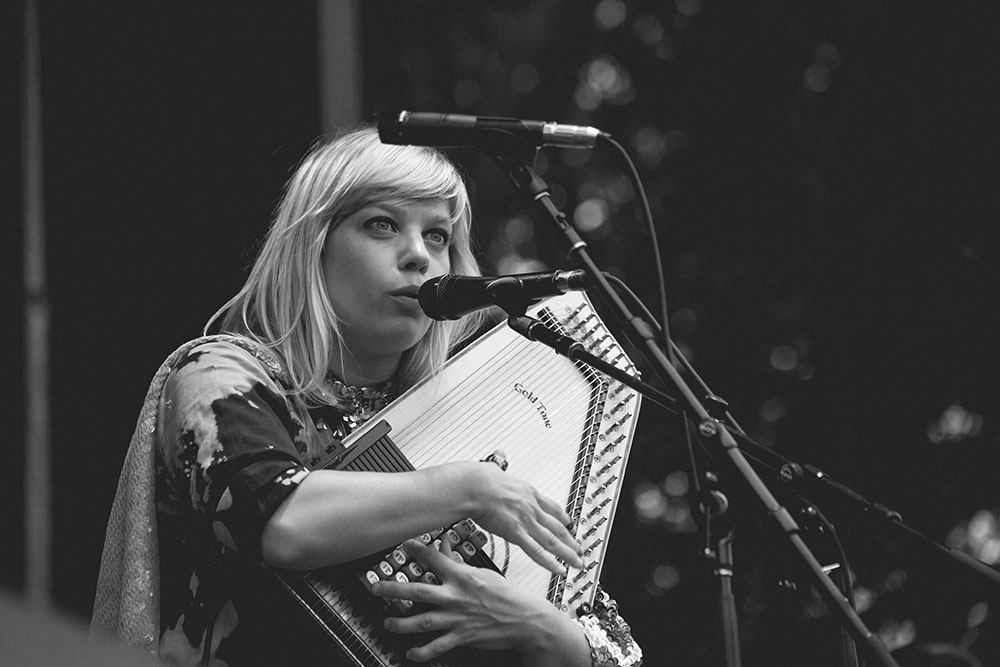 The atmosphere around the picnic was very inviting and friendly. There were tents and lawn chairs, umbrellas, frisbee, soccer, and football games going everywhere you looked, kids flying kites. Everyone was having a great time. There were no major snags in the event and no shortage of things to do with a soundtrack of good music blasting in the background. Harvest Picnic itself has a message to change the way agriculture is going. It thrives on the respect for the hard work of local farmers and musicians and preaches the support for these people who are your neighbours, friends, and family. It's about togetherness. A few of the artists spoke to something of that nature when they had the mic between songs, and Kathleen Edwards said it brings us back to the good things in life. The things that take time and love. It's more than just a music festival, it's a backyard barbecue with a huge family. At harvest Picnic you'll see babies, toddlers, teenagers, parents, grandparents, and even great grandparents. And those in the family that are musicians get up on the stage to play their craft for everyone. I have never felt so welcomed and at home at a concert before. 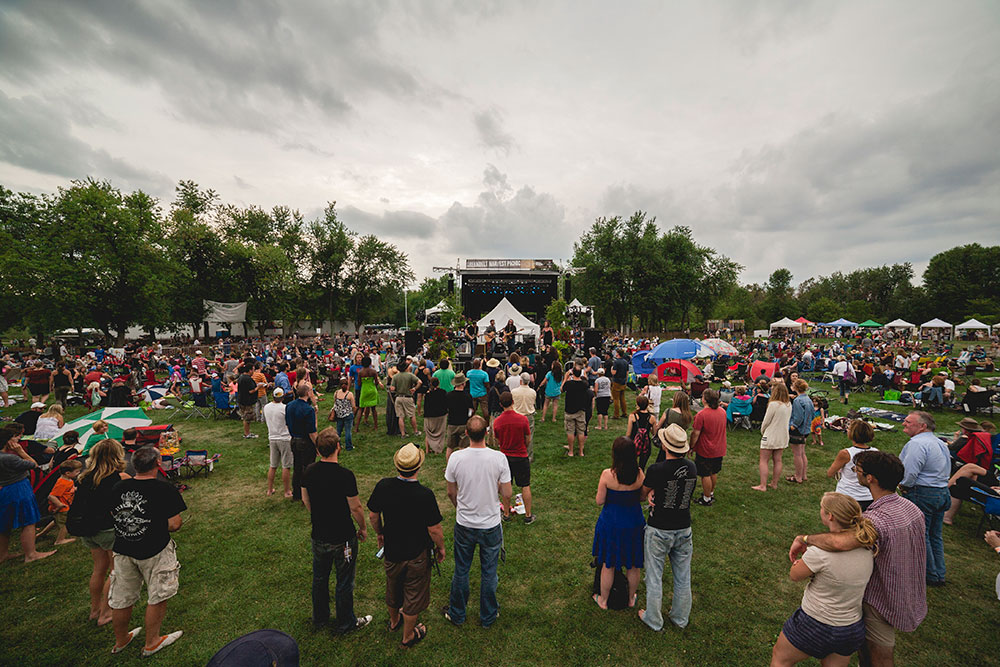 When it came time for the Dinner Belles second set, this time on the Front of the House stage, it started to rain slightly, but nonetheless the crowd was more into the music than ever, with Terra and the Dinner Belles playing a much dancier show than their first. After that it was time for a late addition to hit the main stage. The Rural Alberta Advantage had taken the slot of Iron and Wine who had backed out because of a scheduling conflict. Before they started I had the chance to talk with Nils Edenloff and he said he was a little bit nervous the crowd wouldn't be as into their sound over the softer, lighter bands that had been playing throughout the day. He began by warning everyone “We might be a bit loud.” and they certainly were. The three-piece rocked that stage with a tornado of fury, bringing people to their feet from their comfy lawn chairs and screams were heard from the front rows much louder than any before. Clearly the RAA had many fans in the audience and their nerves could be attributed to modesty. They smashed the place right open, Paul Banwatt was like thunder and lightning on the drums in wonderful contrast to Amy Cole's keys and harmonies. 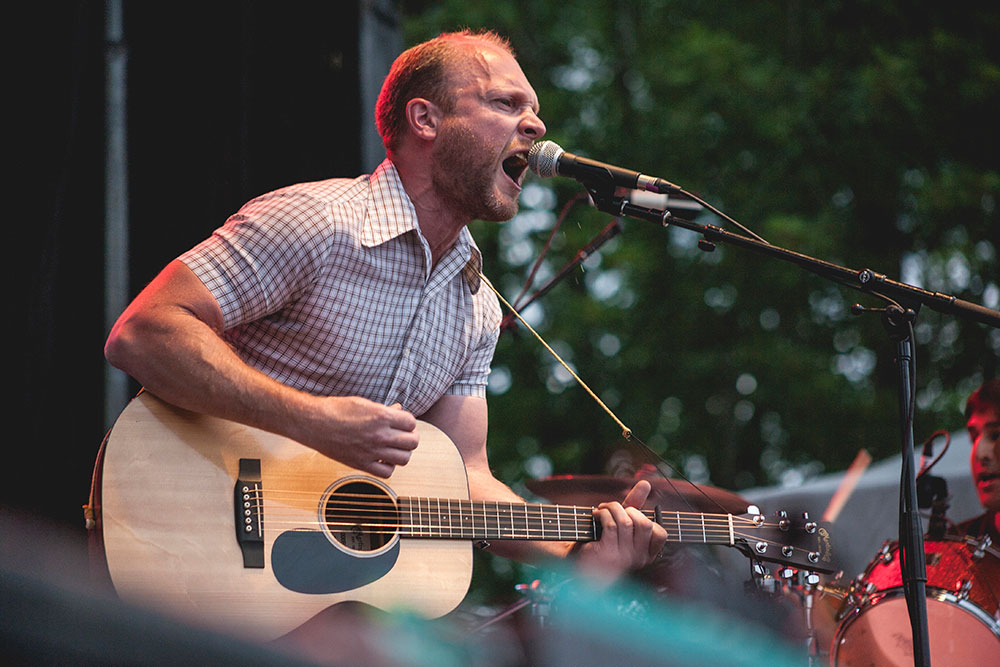 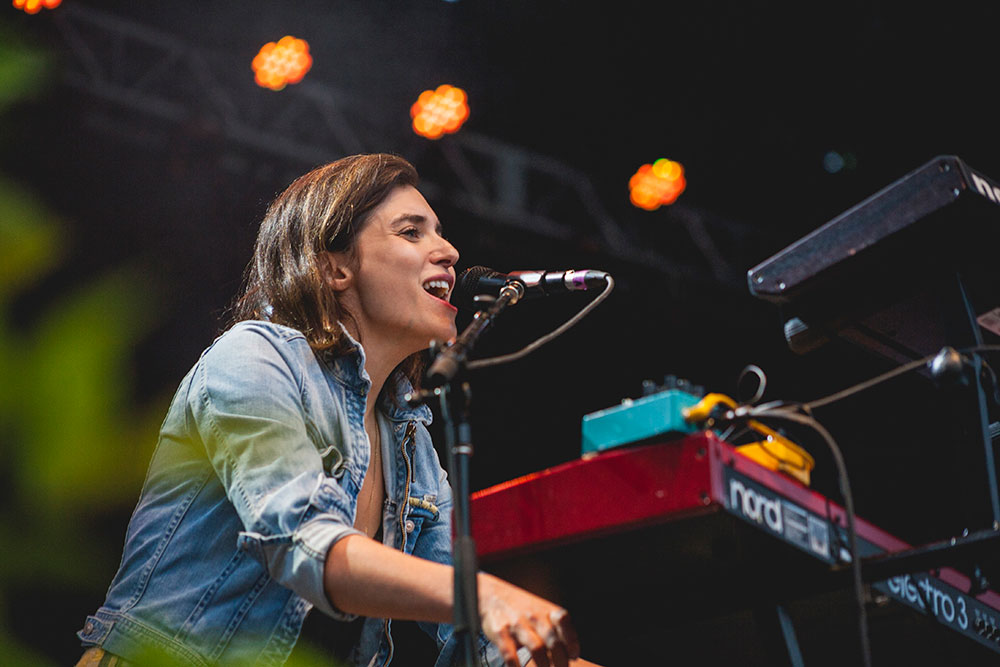 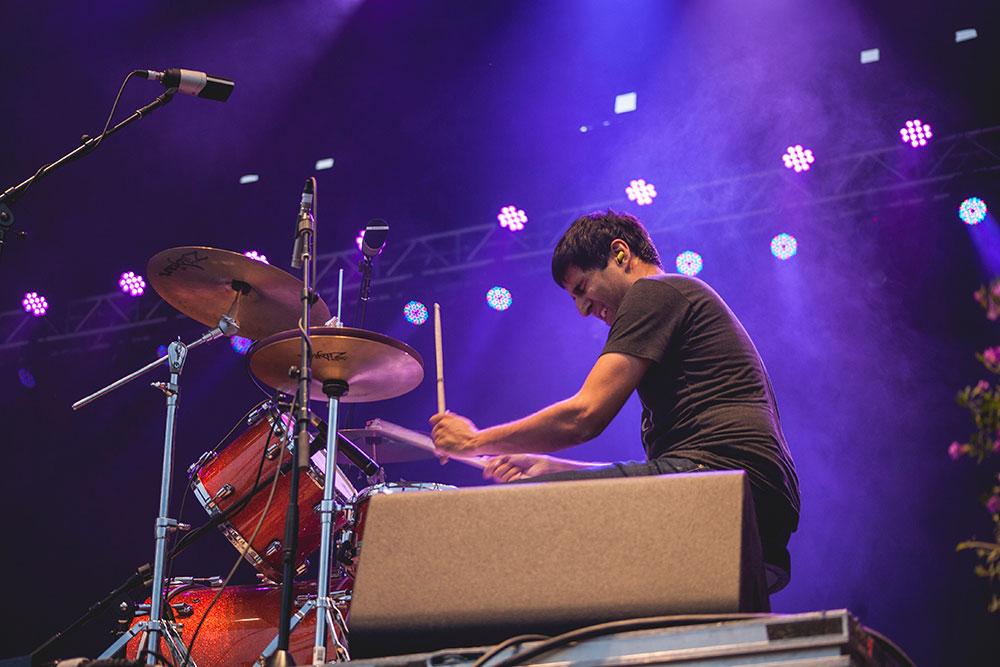 After that spike in blood pressure The RAA said goodnight and The Old Mush Singers began at the Front of the House. This was a unique experience that really highlights the meaning of the Harvest Picnic. It's all about trying to encourage growth and new experiences but at the same time keeping the connection to the earth and to Canada as far back as our traditions go. It's about protecting our heritage and giving it the proper respect. The Old Mush Singers gave a genuine feeling to the whole thing with their native songs and traditional dress. Everyone was silent for the old native men, listening to the music of their voices all working together and a few shakers and drums. A proper transition from the Rural Alberta Advantage to the next main stage performer, Gordon Lightfoot. 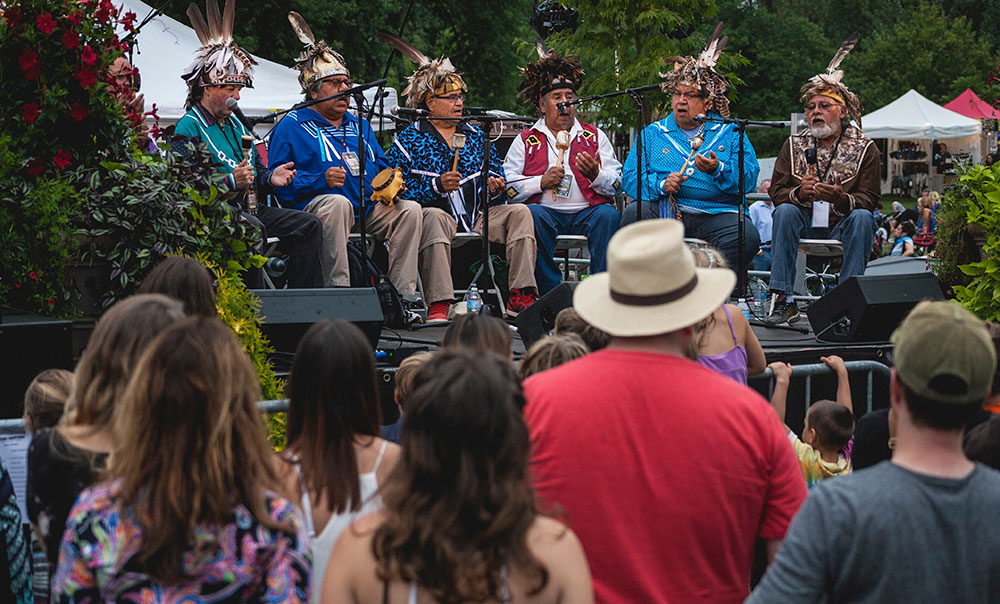 When the Canadian legend, Gordon Lightfoot approached the mic he paused for a moment and then said “The rumours of my death have been greatly exaggerated.” The last thing anyone expected him to lead with. His sense of humour clearly remains intact after all these years in the industry. His voice was a little shaky but the spirit of his music was as tender as always. The crowd was in respectful silence as he performed his songs, except to sing along to some of the choruses which was as touching as if we were all singing our National Anthem. 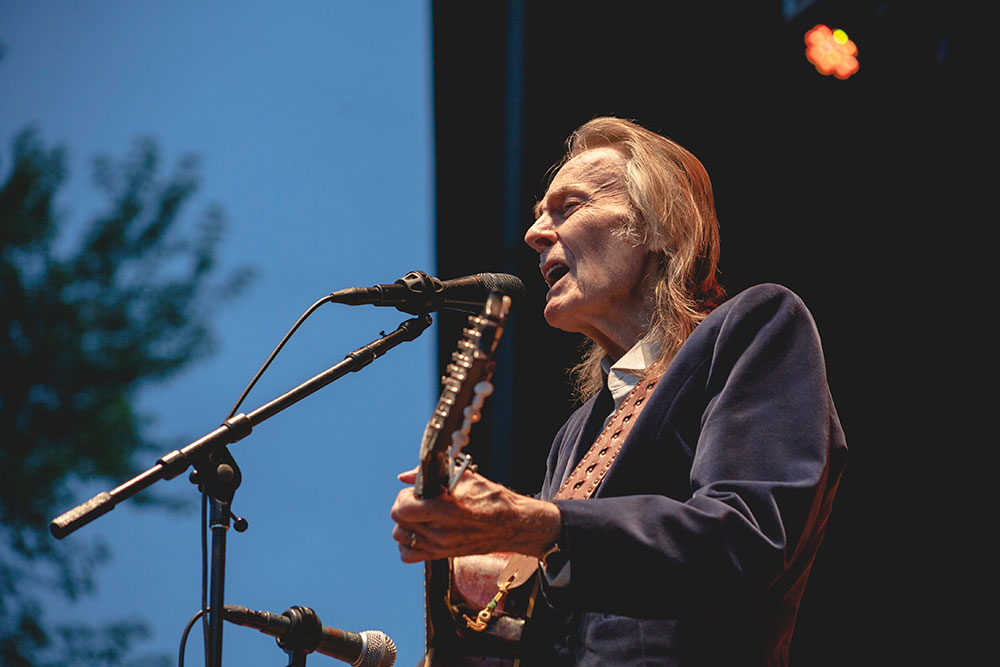 Bahamas played after Gordon Lightfoot, with their slow jam oriented sound with lots of reverb and echos. The smooth and haunting backup vocals were the highlights according to people in the crowd. To give you an idea of the atmosphere, Afie pointed out while he was on stage that everyone was pretty quiet. Quiet in a good way, in the sense that they were really listening to the music. He said usually people get caught up in the party and do a little less listening but the Harvest Picnic crowd had the perfect balance. This resulted in a resounding cheer showing that everyone could be loud but have decided listening is more important. 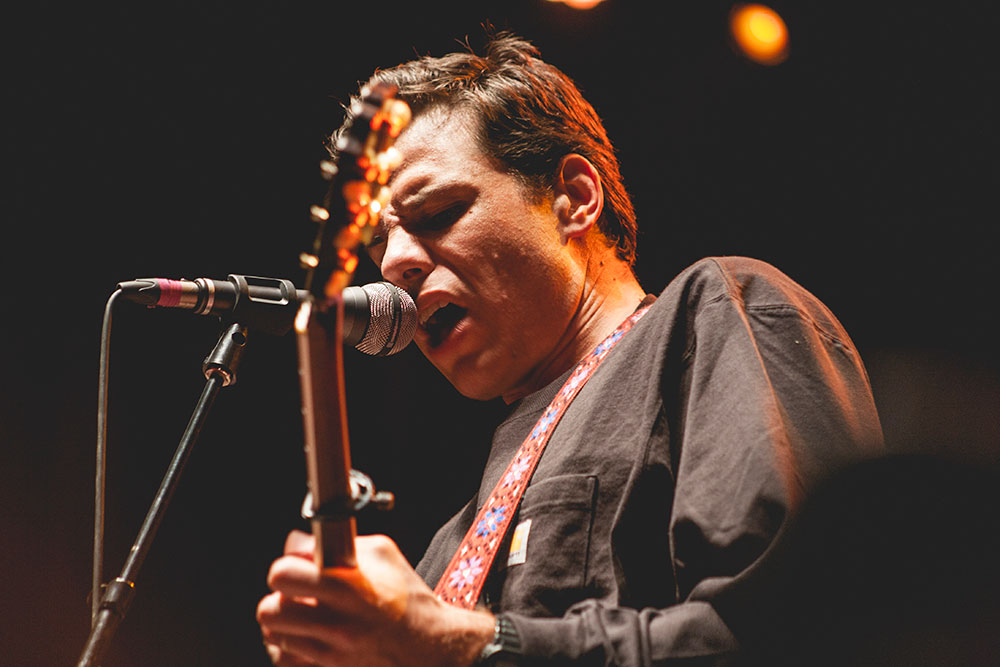 The night was nearing its end and while a couple more musicians hit the front stage, the main stage was being organized for the event's headliners: more iconic local talent from Hamilton, Arkells. They closed the doors on the Picnic in a big way. Their stage presence is unmatched just like it has been since they began. They take the stage and play their music like its the last time, every time. They have so much fun with it and really make a full and unique show. The five or six times I've seen them play since 2008, not a single show was like another, they all had separate feelings even though they shared some of the same songs. Essentially playing in their backyard along with all the other local musicians, their comfort and energy levels were through the roof. They had come from a wedding and were planning on heading back for the reception after the show. They didn't rush off but they made it back in time for the celebration. They've got the same all-or-nothing style that's become an Arkells signature. Max Kerman always has a lot of fun with the show, he took a break  and went on a monologue about a doctor prescribing Anthony his daily piano solo, and made sure he took his medicine. 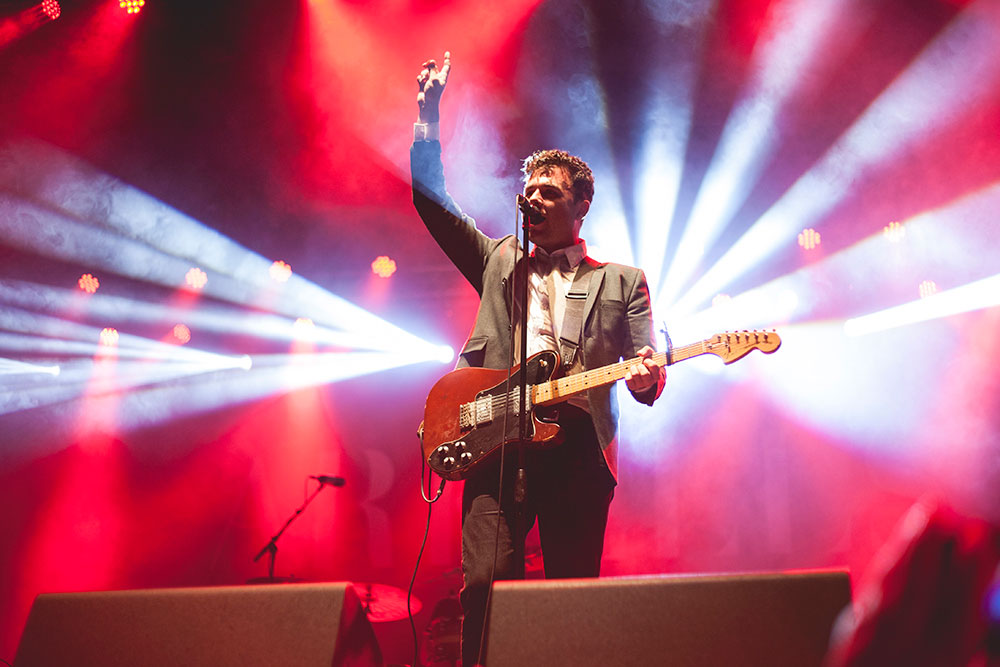 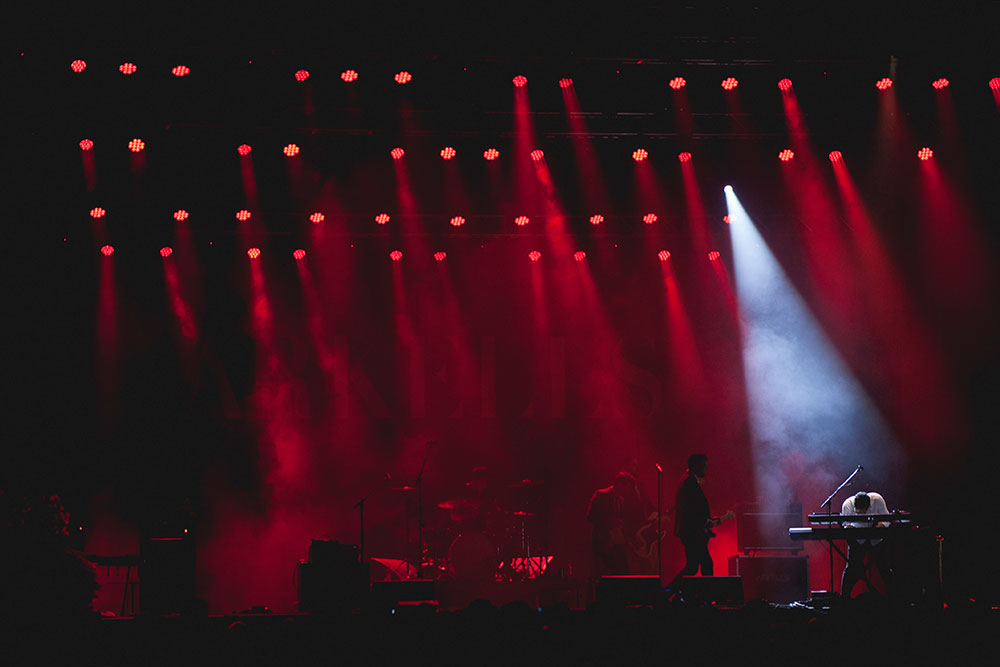 They invited Terra Lightfoot on stage for her fourth appearance of the day for a song or two and they played the night away and the crowd had migrated as far forward as possible. Nearing the end when Max came out for the encore had said on the mic “I know the farmers have to get up early but can we do two more?!” The guys played Book Club and Leather Jacket to hammer home the Harvest Picnic. And like magic, as Leather Jacket blasted from the speakers and the drops illuminated by the colourful stage lights, it started to rain and we all sand the night to an end. 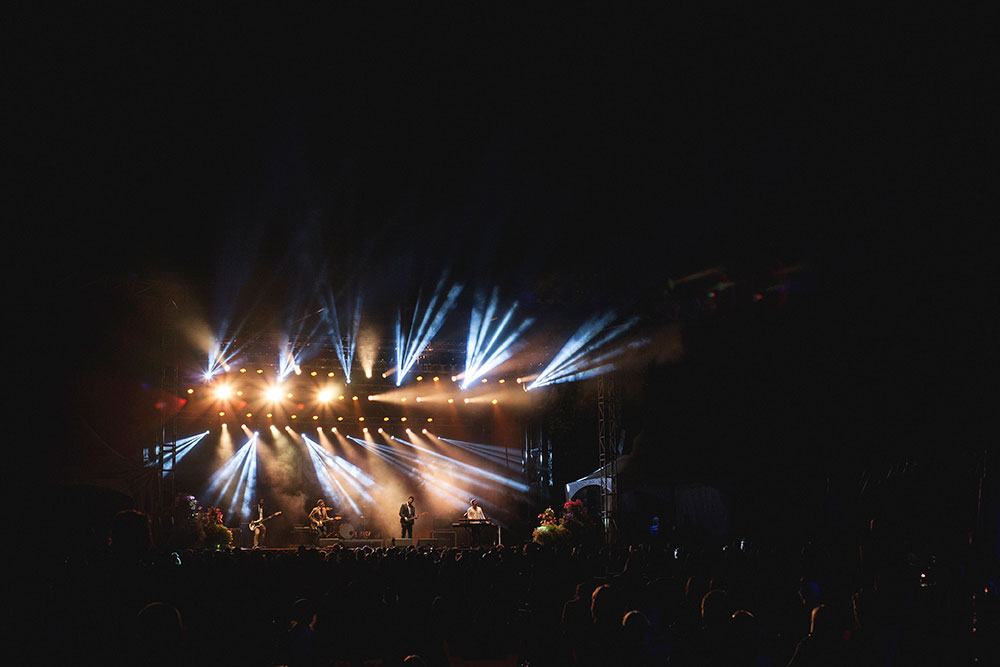 That's it for this year's Harvest Picnic. An experience that goes beyond a music festival. It's driven by a love for music, farming on the greenbelt, friends, family, and life. A uniquely Canadian experience that I am glad I could be a part of.