All photos by Brandon Newfield
Written by Noah Scanga

This year Radio Humber 96.9 was lucky enough to get invited back to Bestival. This year’s festival location changed from Toronto Island to Woodbine Park. Located north of the beach on the east side, this venue provided a magical atmosphere of modern and nature. The perimeter of greenery ornamented with colourful streamers, bohemic umbrellas and glitter; flags flew dozens of meters high acting like a beacon for party revelers. Did I mention glitter was everywhere, all over your hair, your beard, your body, your clothes, everything. 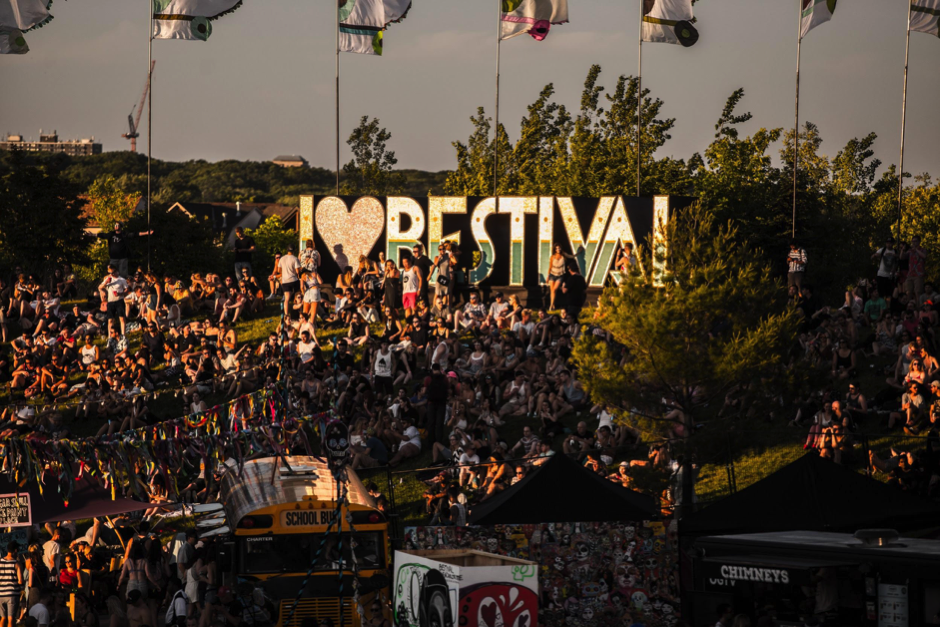 The Cosmic Commune was nestled in behind the hill in front of the main stage, here you could find rare performances, including the talented Frolic Theater who put on a whirlwind experience of the rock and roll origin play Cowboy Mouth. This was a genuine theatrical act that was intoxicating to watch; the crowd kept growing as the show became more convoluted. They are performing at this year’s Fringe Fest, so check them out. 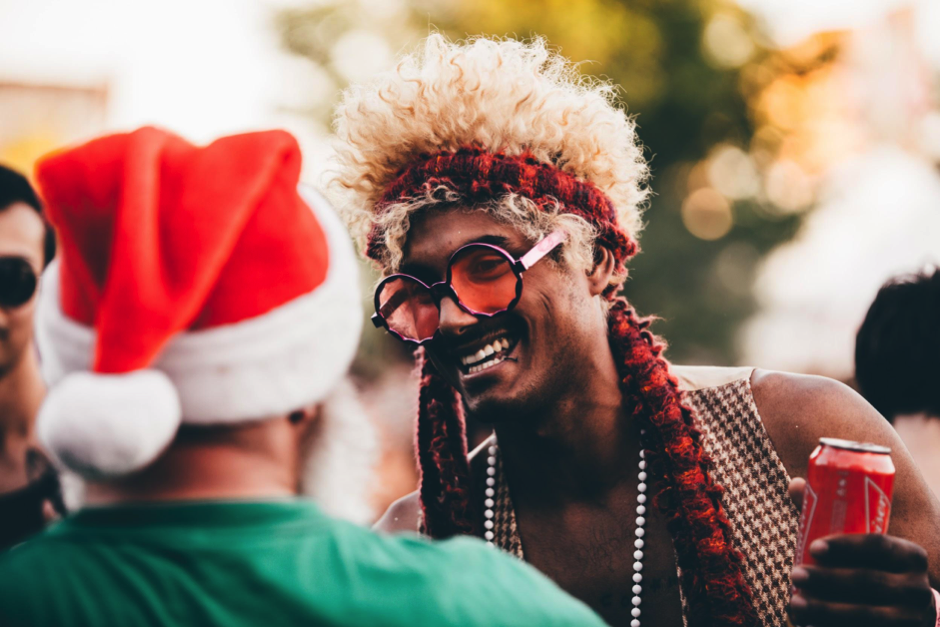 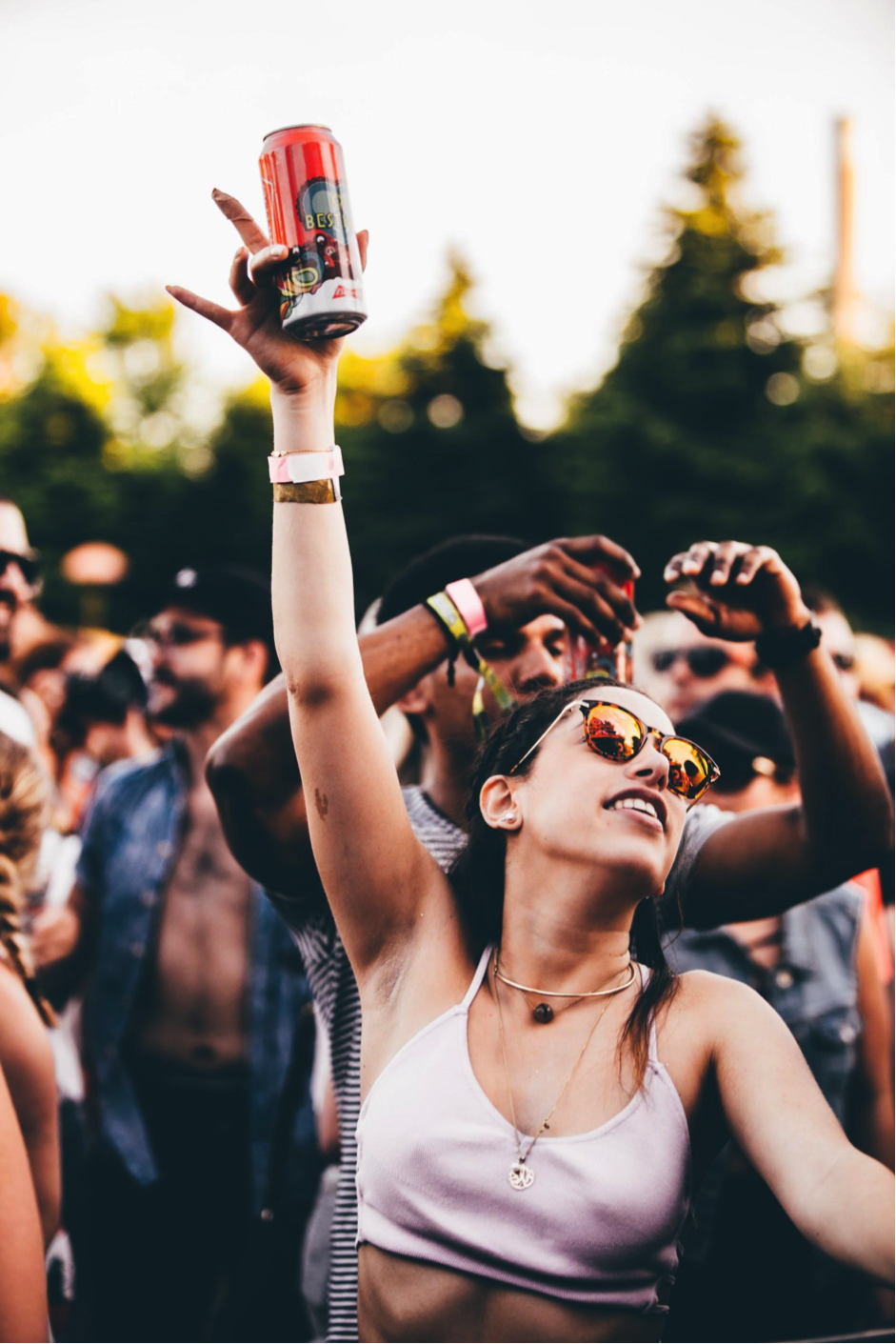 Another entertaining group that I know brought laughs all around the festival was the Lost & Found nonsense facilitators who were located by the inflatable church house; the weddings where absurd. But describe Lost and Found is like that summer camp counselor who is trying to get the kids hyped up, but they’re on 24/7. From break out dance parties, to blind caterpillar races, to eggplant medallions. This group kept positive vibrations flowing through the whole festival the entire weekend. 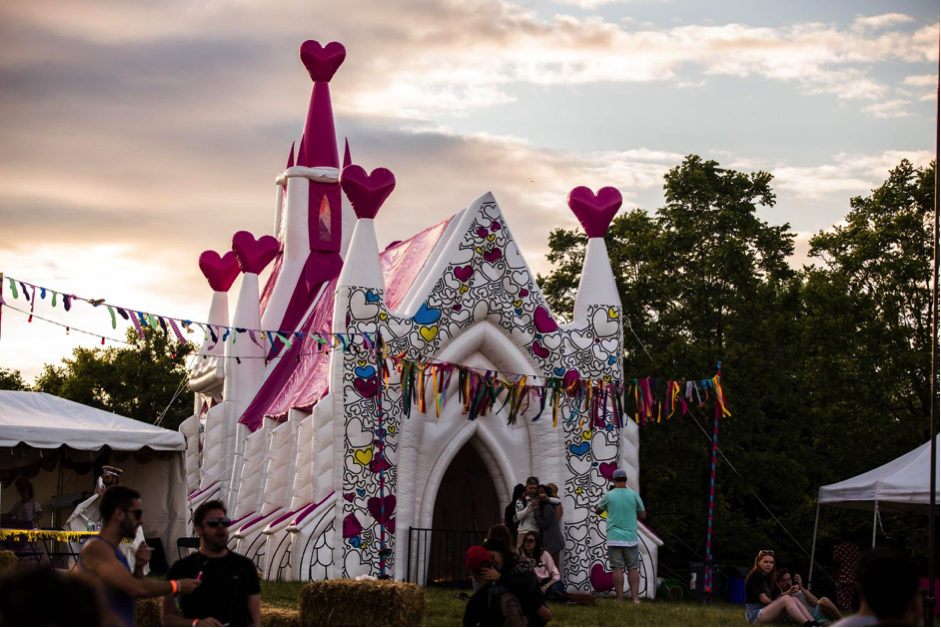 The Bollywood stage is a monument to the art and culture of India. With Pink elephants posted on either side, a pair of cows resting, blue monkeys celebrating on the roof with a vibrant peacock taking center stage. The structure painted in an array of colours, and would light up at night as it spewed fireballs into the air. The environment here was entrancing. Jonathan Rosa kicked off the stage on Saturday and Dubfire brought it down Sunday night. I also heard he put on a killer set at the Coda for and after party that night. The crowd was hypnotized as DJ’s fluidly transitions through the days. Rob Da Bank put on an energizing set early Saturday that had people grooving. This was also the first stage that filled up early throughout the weekend with a sea of heads spanned across the whole area. 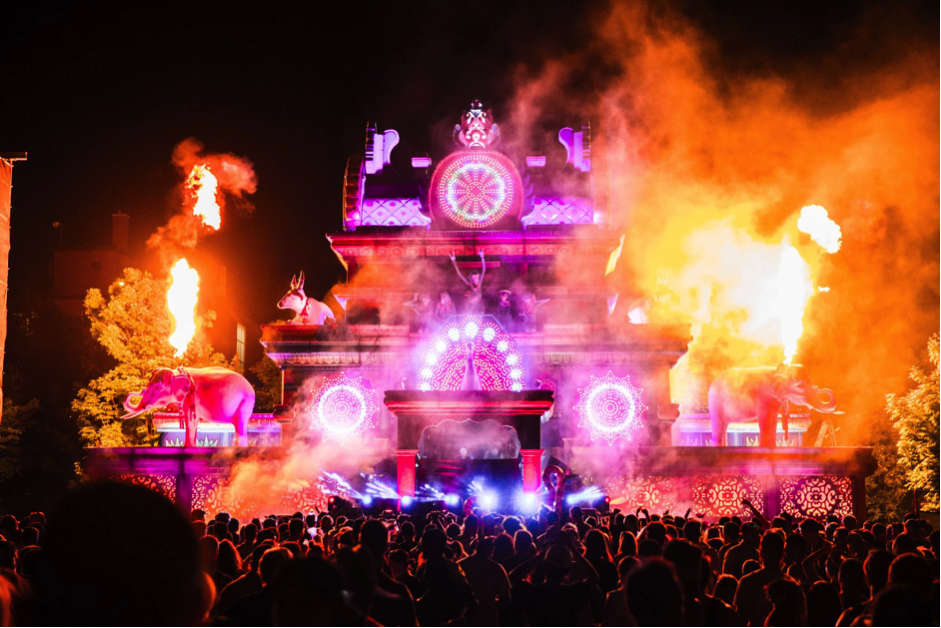 A massive tent found in the middle of the grounds was The Big Top stage, this gave a nighttime atmosphere in the middle of the day. This canvas behemoth hosted a slew of DJs including a lot of Canadian talent such as Smalltown DJs and Thugli as well as some local acts. By the end of both nights this giant rave cave was bloated with dancers sprawled around the entrances. 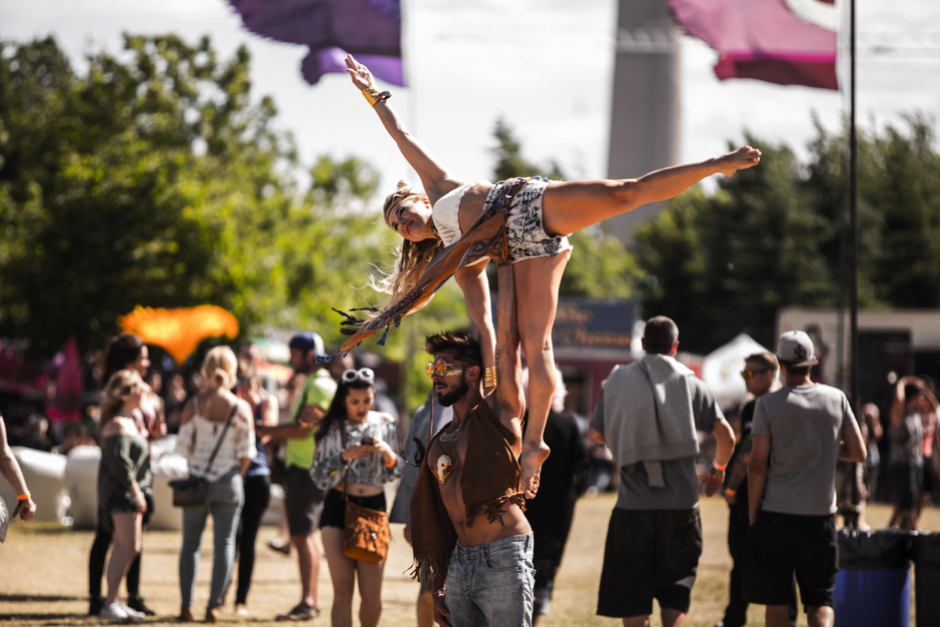 The Main Stage was the home to some incredible musicians. Rationale born in Zimbabwe, and based out of the UK put on an enthralling experience of music off of his 2015 album Fuel to the Fire, and his latest release Palms. Expect great things from this artist that warmed up the stage for British four piece Swim Deep. This was an amazing sounding line-up on Saturday that had a sun kissed daze crowd mesmerized. The entire hill facing the main stage was full of people laying in the grass soaking in the tunes of this psychedelic dream pop immersion of sound. Jamie XX also put on an incredible show playing not only a lot of his own music, but also some re-imagined covers of other great songs. On Sunday Grimes and The Cure left the crowds wanting more. It was interesting watching the Cure fans meander their way through the young Grimes fans hoping to find an established spot for the later The Cure performance which indeed had old bones rattling with young feet tapping. 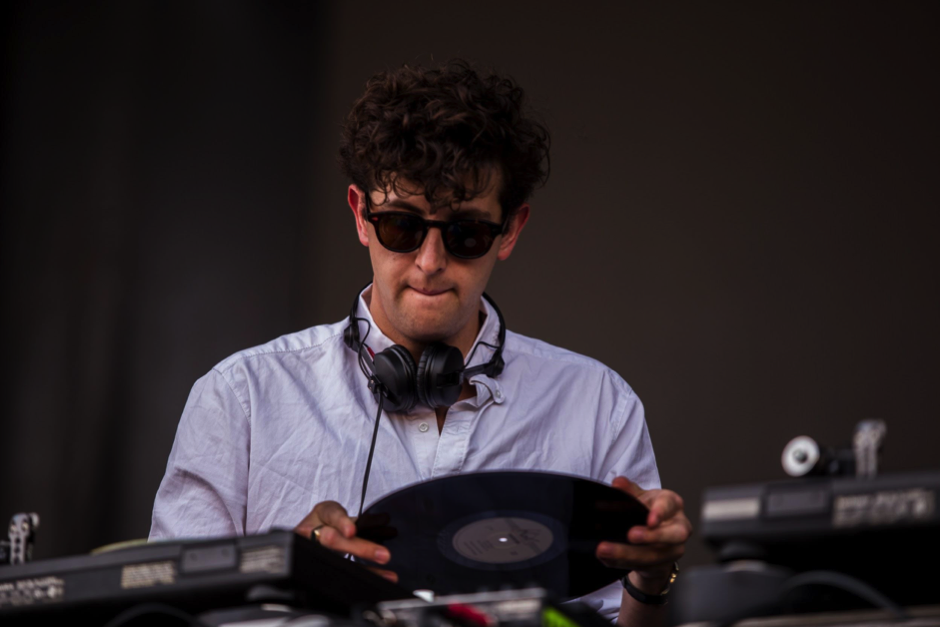 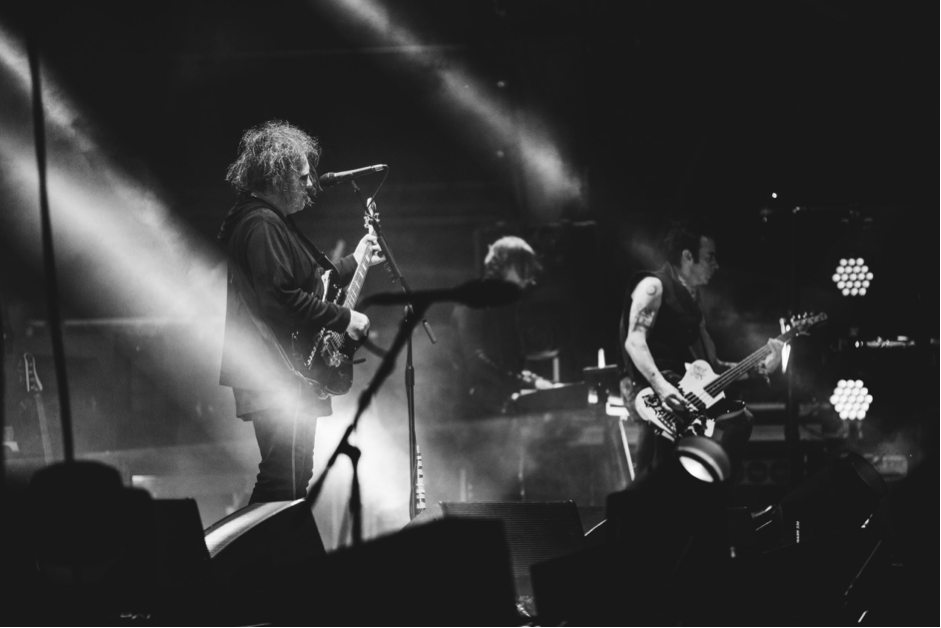 It was cool to see families enjoying a lot of the acts at Bestival, whether it was little kids wearing oversized headphones or earplugs; as long as they were jamming out. Way to go parents for introducing your kids to some awesome music. With more events like this happening in the 6ix, who knows what will transpire out of our city.

-Bestival, thanks for the experience and all the glitter.